Every household in the UK has a form of stored water, be it within tanks sited with the roof, the heat exchanger inside your combi-boilerm, a hot water cylinder or within other elements of an unvented/pressurised system. There are many limescale control devices available in the market, and these are great at offering temporary relief to the effects of hard water, but often these can only last a few hours.

The Scaleout XP is different. Once water passes through the unit it will not revert back to scale forming water again. It is the only limescale control device (LCD) that offers permanent protection to your water system for both scale prevention AND removal!

What is Water hardness?

As rain falls to earth, it dissolves the carbion dioxide with the atmosphere. This Carbon dioxide enriched water passes through many different layers of soil, rock, stones etc and in doing so absorbs minerals such as calcium, magnesioum etc, making it ‘hard’.

It is the ‘hard’ water within over 60% of the UK’s water supplies that causes so much trouble as it forms as limescale or ‘scale’ within water systems.

So is the Scaleout XP a Water Softener?

No it is not. It works in a very different way and in doing so simply serves to protect against the damage that can be caused by hard water scale. It offers extensive limescale protection and is one of the most significant advancements in scale prevention and removal in over 100 years.

Why would I need one then?

By adding a Scaleout XP to your cold water supply will immediately target existing scale, returning your boiler and appliances to maximum efficiency and lower running costs. Remember, with a scaled boiler, you have to heat the scale before you can heat the water. Just 2mm of scale will increase your hot water bills by 12%. 3mm and it rises to nearly 25%!

How does the Scaleout XP work?

Water contains many different types of hardness ions that cause scale. The CBT resin used in the Monarch Scaleout XP uniquely treats both cations and anions within the water. The scale causing ions (dissolved limescale) pass through a bed of food grade ceramic beads housed within the unit, and are transformed into non-scale causing crystals. The crystals attach themselves to the beads. When they reach a certain size, they release themselves from the beads back into the water, where they pass through the post filter.

As a result of this physical change (permanent), scale no longer has the possibility of forming on surgfaces including heating coils and elements (above), fittings, or within the inside of pipes etc. The water becomes both non-scale forming and also descaling, offering many benefits to the homeowner in performance.

Crystals, a by-produyct of Scaleout XP’s operation, will be reduced by the post filter In areas of high levels of water hardness, they may show themselves after the water hae evaporated as a harmless white residue. Thbis can be simply wiped away before it is allowed to accumulate. The Monarch’s CBT ensures pH stability and corrosion control in all types of water. 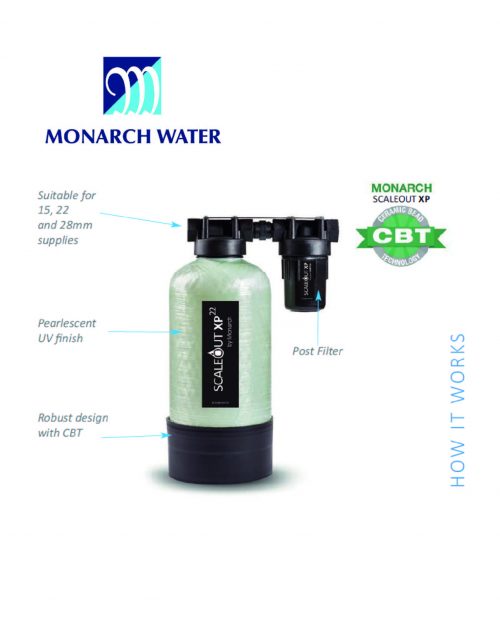 Anything else I need to know?

The beads have a life expectancy of 3 years as determnined by the cleanliness of the incoming water supply (not water hardness). Replacement packs are available.

All models are recommended for use on mains water supplies only. The Scaleout XP incorporates a post filter. This has a low cost internal cartridge that is required to be changed annually.

How do I get my hands on one?

Simple – click HERE to purchase the Scaleout XP in 15mm, 22mm and 28mm

What are you looking for?